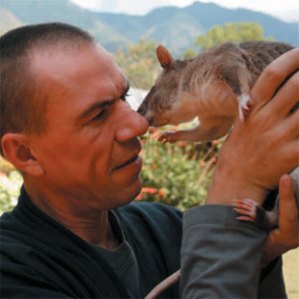 On his ninth birthday, Bart got a hamster, and soon he developed a fascination with all rodents. Years later and a continent away, he taught his furry friends how to be heroes — by sniffing out landmines in Africa.

Growing up in Belgium, Bart Weetjens possessed had a young boy’s fascination with weapons and warfare. Bart dreamed of someday joining the military– but confronted with the realities of such a career, he realized an innate revulsion for war and killing.  Instead he graduated as a product development engineer, took up Buddhism, and began using his skills to help others. In one of his first projects, he designed a soybean-threshing machine for rural communities in Congo; later he helped develop low step-in buses to help the disabled access public transportation.

But as a Buddhist, Bart swore to help protect all life, and eventually he quit his job to tackle the problem of landmines.  In Africa, landmines kill, injure and disable over 12,000 people per year and also pose a structural barrier to development and economic growth. Bart knew from his childhood that rats have an exceptional sense of smell, and believed they could be trained to detect explosives. He also saw that it would be difficult to apply advanced technologies in Africa– and so set out to develop a cheaper, more accessible option.

Starting in an old rented laboratory in Belgium, Bart began training rats to detect minute traces of explosives. In partnership with Antwerp University and Sokoine University of Agriculture (SUA), he then relocated to East Africa and founded APOPO to research, develop, and disseminate detection rat technology for humanitarian purposes. In the southern highlands of Tanzania, Weetjens and APOPO work with indigenous African giant pouched rats to detect landmines and other threats.  It takes about nine months and 6,000 Euros to fully train a “HeroRAT”– but once fully trained, it can pinpoint landmines quickly and effectively, allowing humans to tag and remove them.  Now Bart  has even trained rats for a second mission– sniffing out tuberculosis to help stop the spread of the disease.

• Read more about Bart’s projects or get the skinny on how he trains the rats.
• Watch Bart talk about his story and the amazing HERORats at a recent TeD talk.
• Support HeroRats through a PayPal donation or by “Adopting a RAT” on the APOPO website.